Erodibility of sand-mud mixtures at the bottom of tidal channels – Critical bed-shear stress of mud-sand samples.

The paper addresses the problem of the erodibility of mud and mixtures of sand and mud at the bottom of tidal channels. Various laboratory and field studies [1] have been done to determine the critical shear stress for erosion as a function of basic sediment and biological properties.

Several experiments have been carried out in a laboratory flume, fig 1, (length of 10 meter and a width of 0,4 meter) at the Hanze University of Groningen (The Netherlands). The experiments were focussed on the recalibration of the Eromes-instrument and testing of mixtures of sand and mud in the flume and Eromes-instrument. The Eromes-instrument has been calibrated and used in several studies in Germany [2][3] for determination of the in-situ critical bed-shear stress. The flow velocities were measured with a three-dimensional instrument and mud concentration was measured with two different optical sensors. Experiments have been carried out with sands with different gradations and weakly consolidated muds at the bed at increasing flow velocities.

Experiments were carried out in the fall of 2016 at the Hanze University. Preliminary results of the different sand beds show good comparison, for the courser sand beds, between the flume tests, Eromes-instrument and Shields Curve. Results show that measured bed-shear stresses for the fine bed are smaller than Shields bed-shear stress, indicating that Shield curve is not really valid for fine sediments. The test results have been used to estimate the critical bed-shear stress and erosion rates of the mud at two different wet bulk densities. 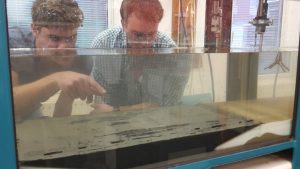 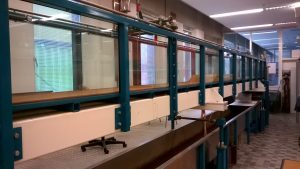 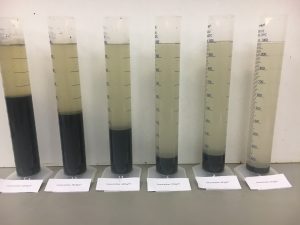 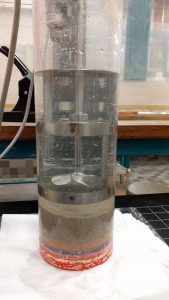 One of the primary goals of the project Sustainable Port Management is to investigate whether it is possible to optimize the tidal window of the port without a significant increase of the maintenance dredging volumes.

Based on the feasibility study in the first phase of the project it was concluded that, based on the mud conditions at that time, it was realistic to implement the Keep Sediments Navigable (short: KSN) method [1]. This was confirmed by computer simulations with experienced pilots, during which the thickness of the mud layer, the mud density and under keel clearance (UKC) during the runs in the 3D model of the port of Delfzijl were varied [2].

To confirm the maneuverability of ships with negative under keel clearance (UKC) full scale field tests were carried out with a vessel with the following characteristics; length 132m, width 23.6 m, draft 7.4 meter and 2 propellers. During the tests, the vessel’s behavior (use of propeller, rudder, thruster and tugs including corresponding speeds and yaw velocities) was monitored and analyzed in a similar manner as during the computer simulation runs [3].

Before the trials and after each run the in-situ density profiles of the fluid mud were measured at pre-defined locations. Multi beam surveys were performed from this before and after the field trial as well.

Summarizing it can be stated that based on the trial runs an UKCNet between 0% and roughly +14% (up to 20%) the mud layer has a significant influence on the vessel’s behavior, see colored area in figure 2. It should be noted that the current minimum operational UKCGross of +10% is already in the unfavorable range. Based on the trial runs, no reduced maneuverability is expected for an UKC less than +10% to penetration in to the sediment up to an UKC of -5%. 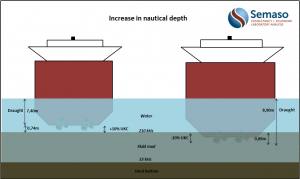 Increasing the nautical depth and decreasing maintenance dredging by sailing through fluid mud in Emden and Delfzijl.

Active Nautical Depth has already been implemented in the port of Emden for several years by the Port Authority. The adapted dredger the ‘Meerval’ is used for this. This vessel dredges the sediment and aerates it, making it possible to sail through this created fluid mud layer. 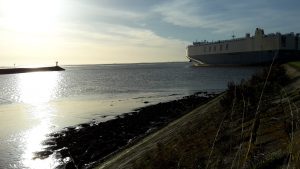 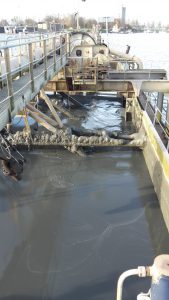 Several tests have been performed with sands of different grain sizes (D50) in the last couple of weeks. The sands have been monitored with different water flows and preliminary results show good comparision with the ‘Shields curve’. Next step would be to test sediments from a port in the Waddensea estuary.

The test are performed at the Hanze University and under supervision of Prof. Dr. Leo van Rijn and Semaso BV. 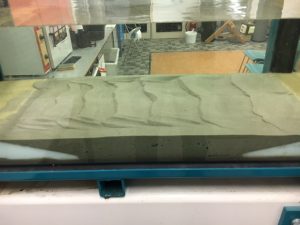 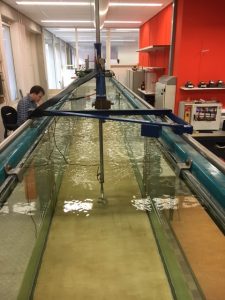 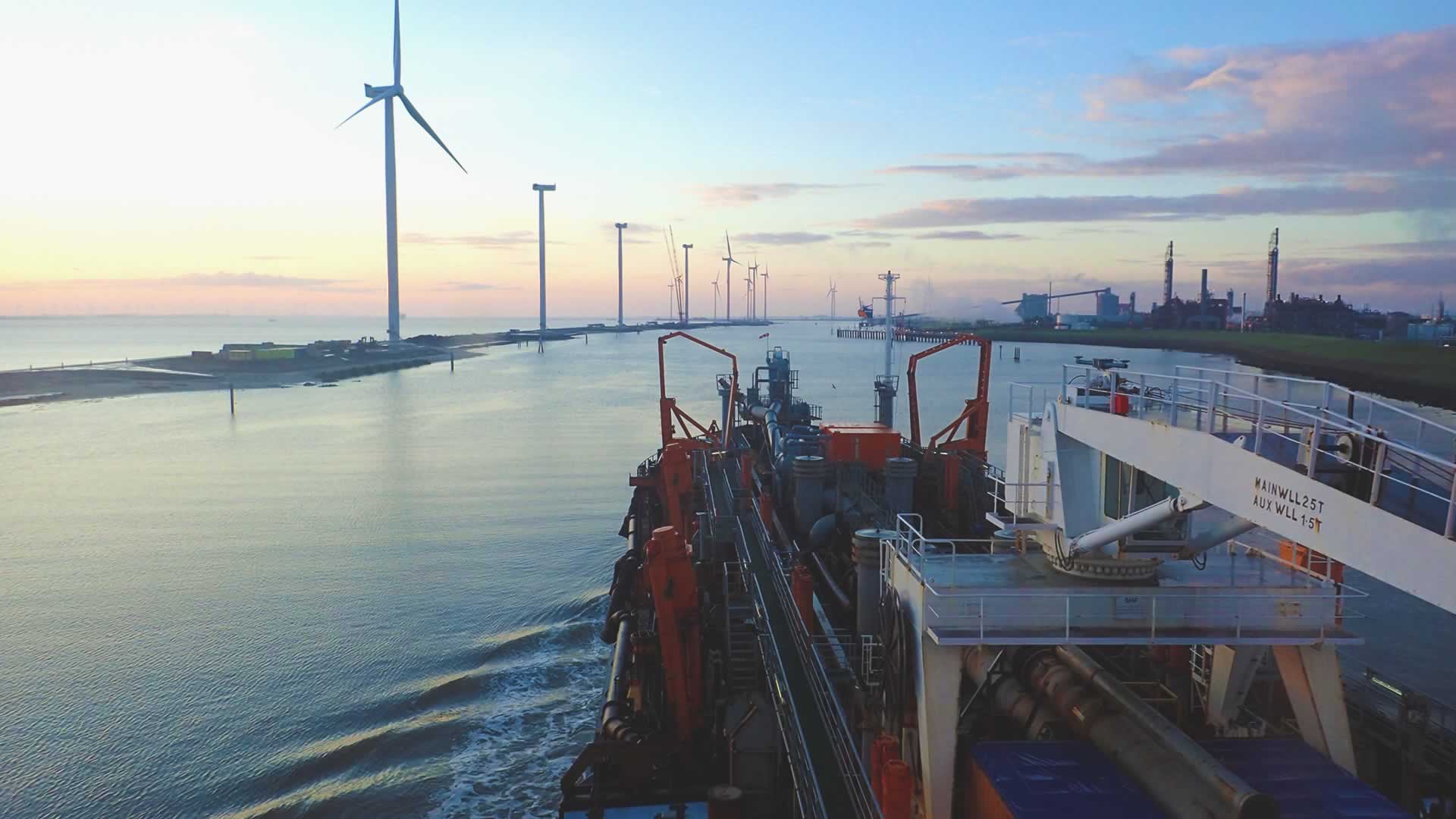 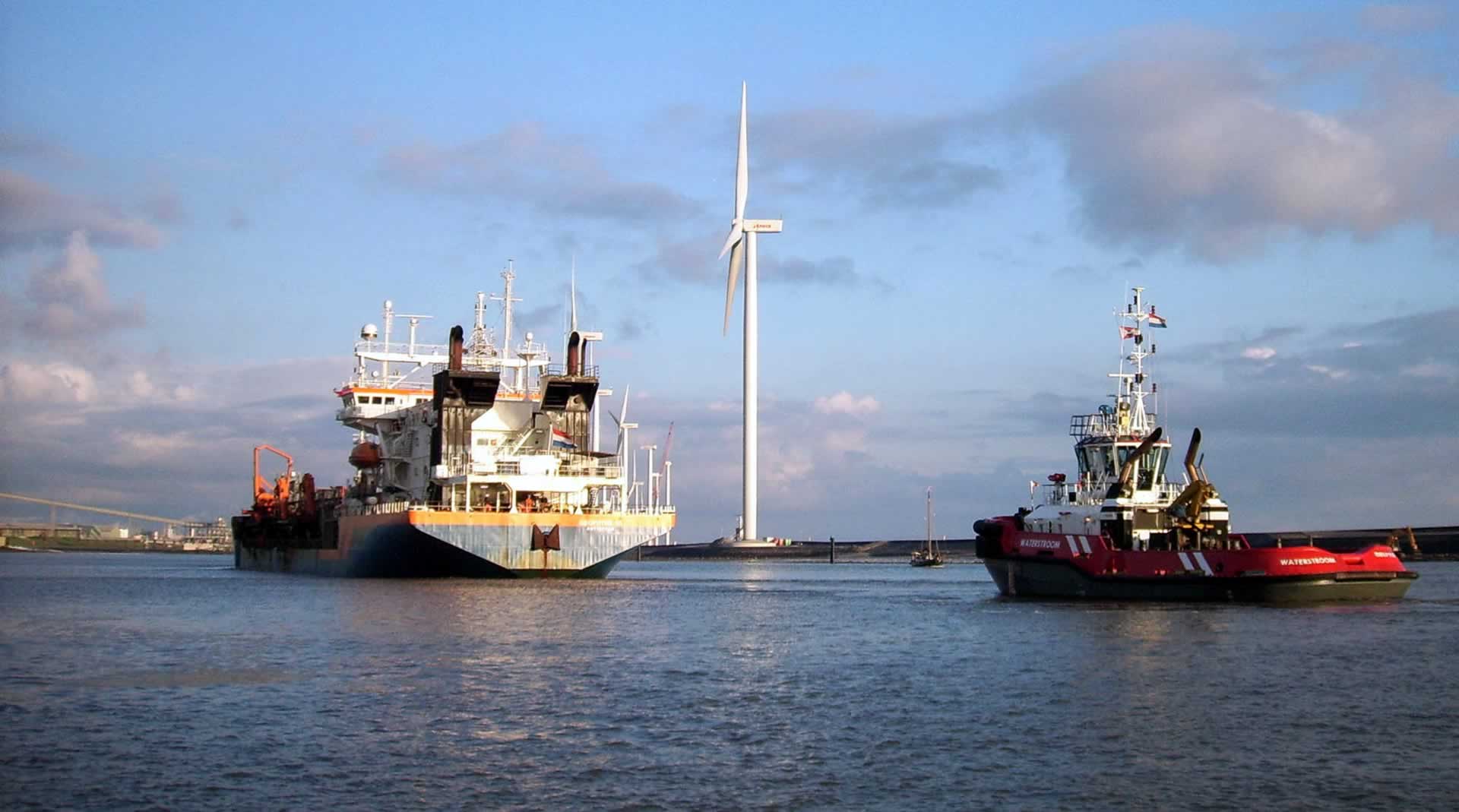 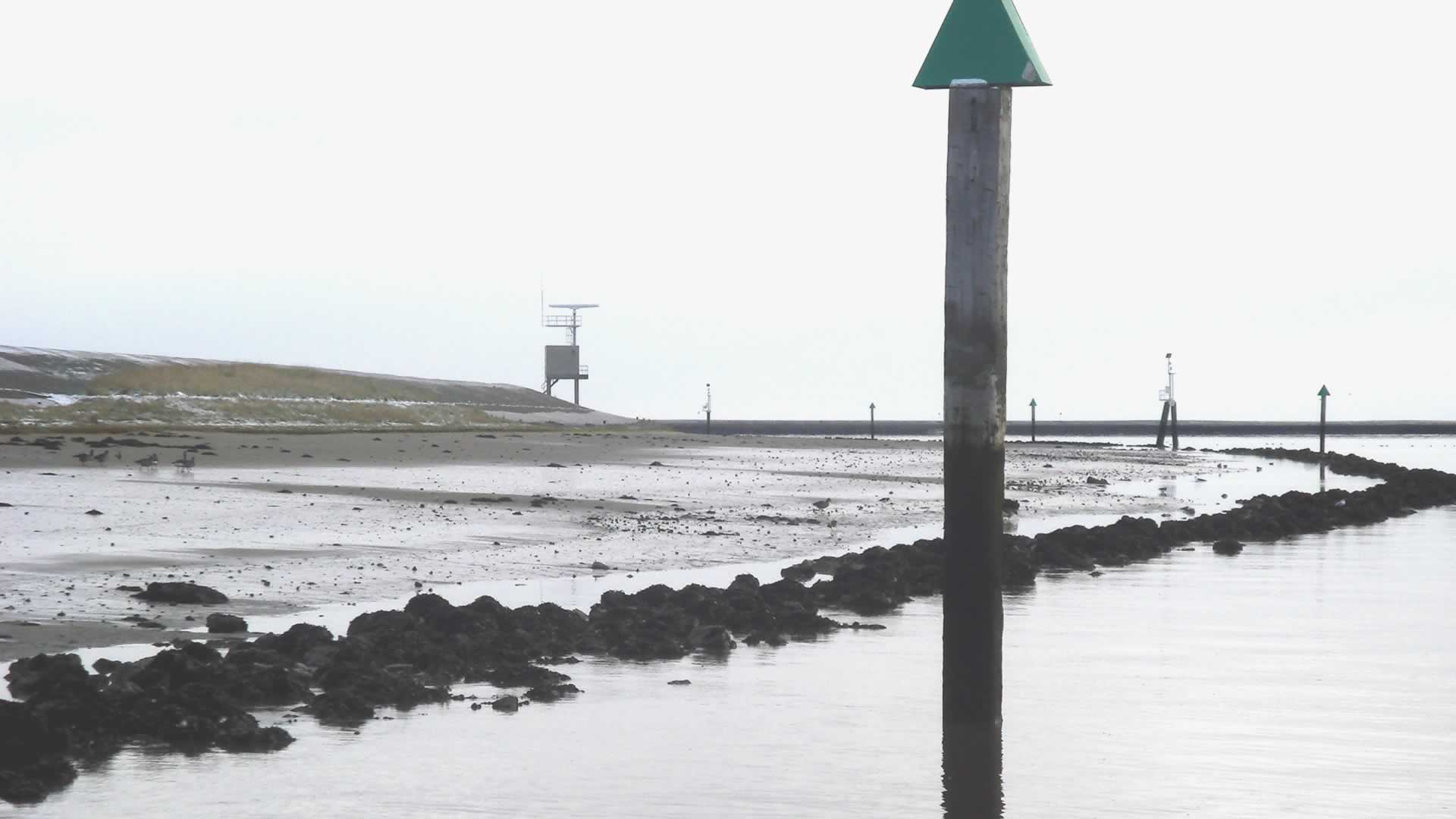 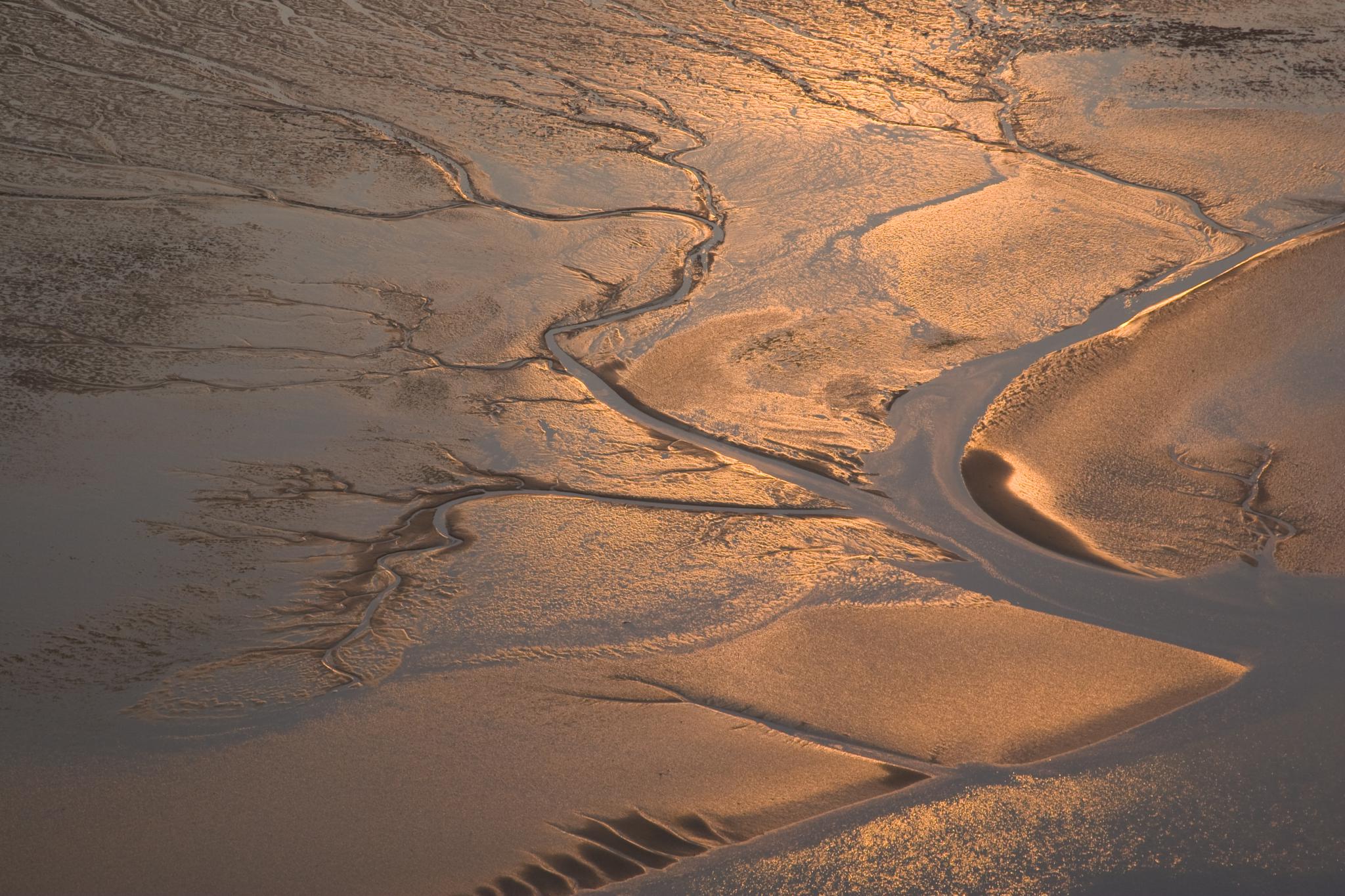